Plastics 101: From Resins to Rolls

Walking you through the fascinating blown film extrusion process, from plastic resins to finished rolls. 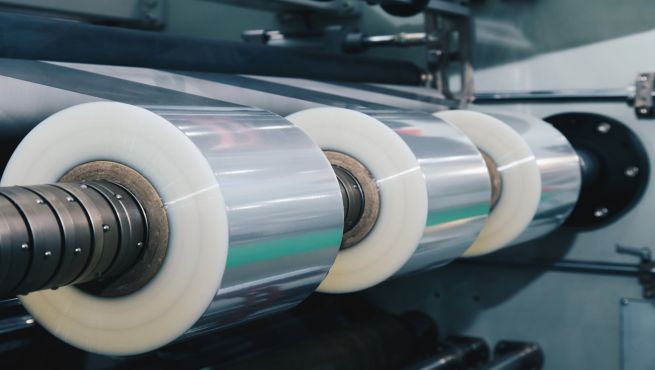 At the surface, plastic film seems like a very straightforward and simple product. Many think plastic cling wrap and grocery bags are the extent to which films are used, when in reality plastic film is used in the majority of modern packaging designs. Aside from visual characteristics such as color and clarity, a copious amount of more complicated technical considerations must be taken into account. Gas and moisture barriers, heat resistance, and tensile strength are just a few examples of characteristics that must be planned out when designing and manufacturing any roll of film.

One of the most popular forms of modern plastic manufacturing is called blown film extrusion. Those familiar with IEF or the industry in general can likely identify recognizable steps along the process, such as the bubble or the extruders. However, most are unaware of how the process actually occurs. In our first Plastics 101, we’d like to walk you through the blown film process, from polymer resins to finished rolls.

Each roll of film, no matter the size or shape, begins its life as a polymer in resin form. These resins vary in chemical make-up and color, and are typically only a few millimeters in diameter.

You’ll often hear about post-consumer resins (PCR) or post-industrial resins (PIR). PCR and PIR are resins that have been sourced from recycled materials that have been used in either consumer or industrial applications. The use of these recycled resins greatly reduces the amount of virgin resins created, lowering the overall environmental impact of plastic manufacturing.

Different types of resins can be added to the formula depending on the desired application of the finished product. For example, if you are designing a film for liquid packaging, you might mix in high density polyethylene due to its superior oxygen barrier properties.

When it comes to resins, we can think of them as the ingredients that a chef uses when cooking. They can vary in appearance and properties, but at the end of the process they all work together to form the final dish.

Extrusion and the Bubble

Once the resins are gathered, they're fed into the extruders. The extruders melt and mix the resins to ensure a homogenous blend. This process occurs via very high temperatures and pressure. The melted resins move from the extruders on to the die/air ring, where the molten plastic will be expanded upwards via blown air. This is where the process gets its ‘blown film’ name.

According to IEF’s Technical Director Steve Brzostowicz, “the annular die spreads the polymers evenly around, where they exit the die through the die lip. Air is added inside the bubble to expand the film, and the air ring cools down the film as it exits the die."

The ‘bubble’ that Brzostowicz refers to is actually the molten plastic that is being blown upwards. Think of blowing bubbles, but with hot plastic instead of soapy water.

The now cooled film reaches the top of the tower, being pulled upwards by the nip rolls which stretch it to the desired thickness. The nip rolls also prevent air from escaping throughout the process, and prevent wrinkles from developing in the film. It is here where the collapsing frame converts the bubble to flat tubing, and we begin to see a product that is more recognizable.

“With the film now flattened, it moves along to the treaters.” said Brzostowicz. “The treaters will roughen the surface of the film, making it suitable for printing and lamination.” This treating process is an electro-static process that gives the film optimal surface tension properties.

After going through the treaters, the film reaches its final stop: the winders. The winders take the now treated, flat film, and wind it onto cores to form rolls of finished product. Depending on the desired size, the rolls can be cut and separated.

Finally, the operators take the finished rolls of film and load them up onto our trucks, ready to be shipped to our valued customers.

Here’s a video from one of the global leaders in blown film machinery, Hosokawa Alpine, which showcases one of their 5-layer lines. While you’re watching, see if you can identify all of the different steps we discussed. Don’t worry...you won’t be graded!

If you have any questions about the blown film process, our technical experts are ready and eager to help. Contact us today!